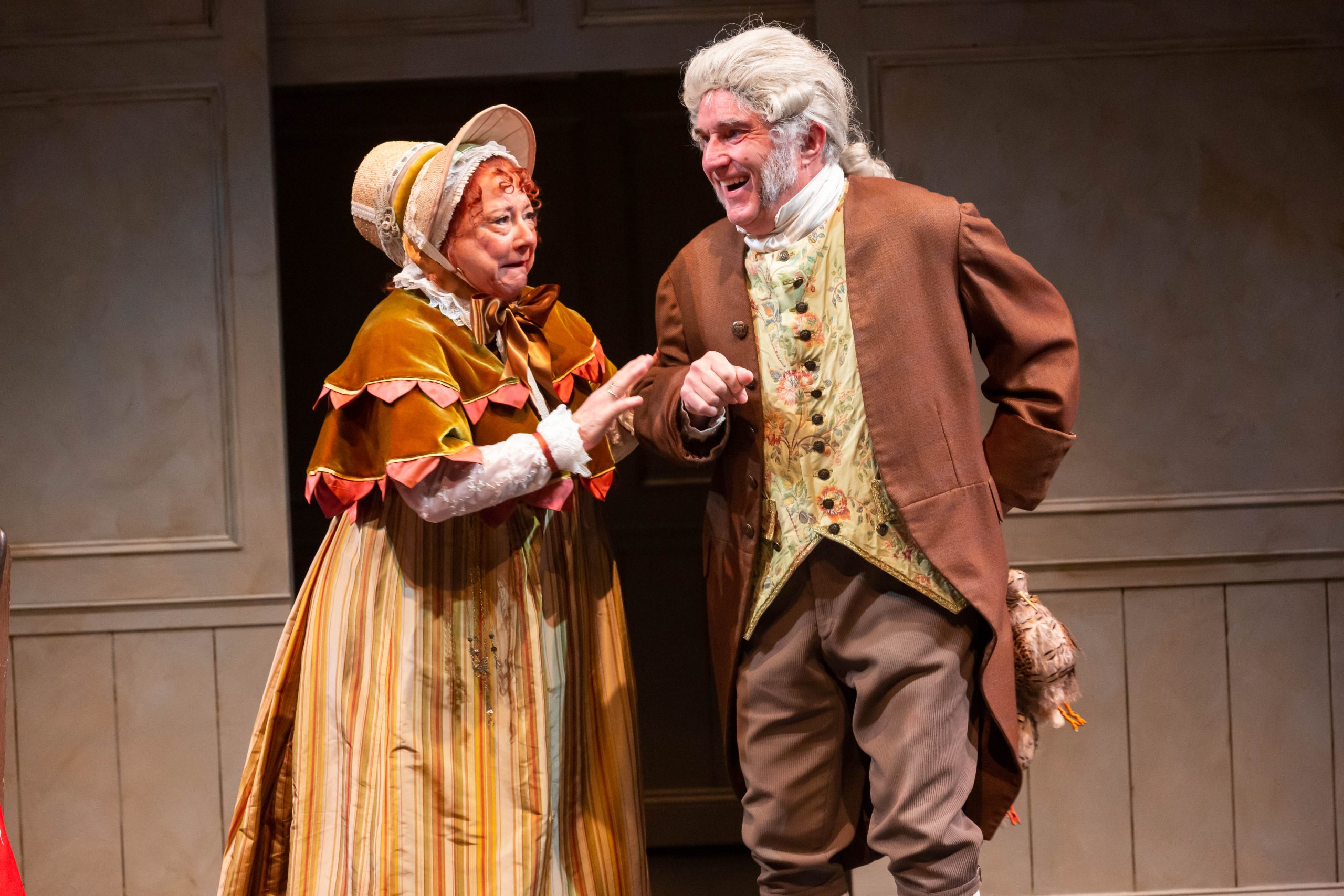 I could not have been more pleased when actor Priscilla Lindsay reached out to me last month to inform me that she had been cast in “Sense and Sensibility” by Jessica Swale – an adaptation of Janes Austen’s novel – which is presented by Indiana Repertory Theatre on the OneAmerica Stage through Oct. 9. The show opens the IRT’s 50th season. I attended the opening night performance on Sept. 16. and reviewed it in this column.

Friends and colleagues, Lindsay and I have known each other since 1974. She made her first appearance at the IRT’s original home, the Athenaeum. Appearing in 60 productions at IRT by 2010, she also served as its associate artistic director. She then left Indy to relocate to Ann Arbor, Michigan, where she became the Chair of the Department of Theatre and Drama at the University of Michigan. She will retire from her position there in the spring of 2023.

I had the opportunity to chat with Lindsay on a Zoom call recently. Below is an edited transcript of our conversation. 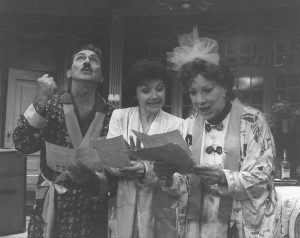 R. Priscilla Lindsay in “Light Up the Sky” – Courtesy of Indiana Repertory Theatre Use. with permission.

How long have you been acting?

I began acting at the University of Michigan. I got my MA there in a professional theatre program, and I started acting professionally right out of that in 1973.

Does it get any easier?

No. The issues are different. Mrs. Jennings, the role I play now, is right out of heaven for me because it is not terribly physical. I just have so much fun with her. The last thing I did at IRT was in 2016, “The Game’s Afoot,” and I have also done a few things in Michigan since then, but there are always questions at our age. How is the old noggin going to handle lines and things R. like that? I am knocking on wood that those brain cells are still active. (laughs)

I am much more careful about it. I started working on “Sense and Sensibility” in the summer, just to get it in my bones. The techniques I use have pretty much been what they have always been, and they work very well. You know, it is not a giant role; it is a supporting role, which is perfect.

Did you have fun creating Mrs. Jennings?

Oh, my gosh. Yes. And of course, Peter Amster, the director, is such a delight and so smart and so encouraging, and he really wants to see what we bring to the table, so I was constantly picking up things to show him in rehearsal. We would do the scene, and I would do something, and I would keep an eye out to see if he were tickled by it or delighted. If there was no reaction, probably not.

Is your performance informed by your fellow actors?

Yes. Oh my gosh. Ron Rains who is closest in age to me, a Chicago actor who plays all those multitudinous servants and Sir John and the doctor. He is so fabulous, and the rest of the cast is young. In fact, Rey (Cereyna Jade) Bougouneau, who plays Marianne, is the age I was when I first came to IRT. She is twenty-four. She is from St. Croix. The effervescence and the energy and the creativeness with the rest of the actors is just beamed into what I do. And I admire them so much. Casey Hoekstra is in the cast. He was in the cast of “12 Angry Men” a few years ago here. Brilliant. So is La Shawn Banks. Devan Mathias is so wonderful. She plays such diverse characters so beautifully. 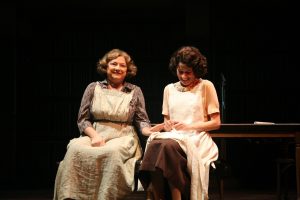 L. Priscilla Lindsay in “Our Town” – Courtesy of Indiana Repertory Theatre Use. with permission.

You have worked with Peter Amster over the years at IRT?

Oh, definitely. We did “Pride and Prejudice” years ago. He directed me in “Driving Miss Daisy” and “The Game’s Afoot,” as well.

When did you debut at IRT?

I appeared at the IRT in 1974 in a production of “Harvey.” The theatre was at the Athenaeum in its third season. Richard Ferguson-Wagstaffe, my husband, was hired as the resident scene designer. The second season, I finished at Missouri Rep and came to audition for the company here and got into the third season and my first show was “Harvey.” The founders were Ed Stern, Ben Mordecai, and Greg Poggi. And do you know that last week, Ben’s widow, Sherri Mordecai, flew in from North Carolina to see the show? She just wanted to be here because it is the 50th anniversary of IRT.  She was so proud of the show. She thought the production values were high, and she said Ben would have been proud.

What are your thoughts about the IRT’s reputation and longevity?

It is a miracle. To see it supported by the community and supported by business and the corporations of the city, valuing it as they do. The IRT, the IMA, Indianapolis Opera, and the Indianapolis Symphony and all the other local theatres, make Indiana a valuable place to live, and I discovered that upon visiting after 12 years. I visited my kids, of course, throughout that time, but I am back in the midst of it, and it is still vibrant and growing.  I am so proud of what the IRT has accomplished, and what Janet Allen (IRT artistic director) has accomplished. She is going to retire at the end of the season, and they are going to get a new artistic director. I feel in my bones it is going to be someone wonderful.

What do you remember about meeting Janet the very first time?

She was inescapable. When she came here in 1980, she had long dark hair, and she had these fabulous boots, and she strode down the halls, and she was so – not that she is not sexy now – but she really was then. She was someone to be reckoned with and so smart.

Do you feel the spirits of all those you worked with at IRT while you were there?

We have all said for years that Tom Haas’s (late IRT artistic director who died unexpectedly) ghost is there. I feel the weight of the history and the whole thing. In one of the hallways, it is the mezzanine hallway to the observation booth, some old photographs are there of when it was a Cinerama and was just amazing. The entire building has such a terrific history. Every day there are people taking pictures of that marquee. It is such a venerated landmark for the city. 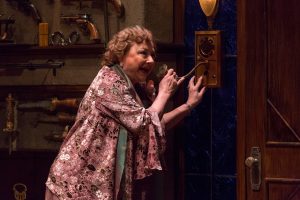 Priscilla Lindsay in “The Game’s Afoot” – Courtesy of Indiana Repertory Theatre Use. with permission.

Are you on sabbatical from University of Michigan?

It is called Duty Off-Campus. If I took a sabbatical, I would have to come back and teach two ful” semesters according to the rules at Michigan, and I did not want to. I want to retire in the spring, so if they give me Duty Off-Campus, I am gone for this semester doing something wonderful like I am doing. Then, I will return in January and teach my last semester. I will direct and teach some classes and then call it a day. I will have been there 13 years when I quit.

How has that experience been for you?

I arrived in Ann Arbor in 2010 to be the chair and to teach and to direct. I think the first year was a blur, but I loved it. It is my husband’s and my alma mater, so we were thrilled to be back there. That is where we will retire. It is rated as one of the top professional training programs of the theatre in the country. We audition up to 350 actors a year, and we take twenty students.

What is next for you?

I do not know. I am going to go back to teach and direct a show. Then Richard and I are going to France once we get done, and after that I do not know. We will see. I have acted at Jeff Daniel’s theatre, Purple Rose. That was a fun place to be. It would be fun to do some more acting. I have loved doing “Sense and Sensibility” so much. It has been such a real blessing to be back at IRT – to be in those halls, on stage, and backstage. Oh, my golly. It has been fabulous.

For tickets and information about “Sense and Sensibility” visit irtlive.org.