It was supposed to run in 2020, but COVID put the kibosh on the Indiana Repertory Theatre’s production of “Sense and Sensibility.” On Friday night, it finally opened. Adapted by Jessica Swale from the Jane Austen novel of same title, published anonymously in 1811, the play was presented on IRT’s OneAmerica Mainstage. 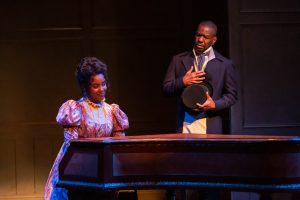 Peter Amster, who has overseen many previous productions at Indiana’s premier professional theatre, directed the play, which opens the IRT’s 50th season. Another IRT regular, Priscilla Lindsay, who has performed numerous times throughout IRT’s history, was a member of the racially diverse cast. Following in the wake of Black Lives Matter, the casting of people of color in a classic such as this, or any work for that matter, is a welcome trend, long overdue in the theatre.

“Sense and Sensibility” follows the three Dashwood sisters, forced to move with their widowed mother from Norland Park, the estate where they grew up. Because the family home is passed down to John, a son of Mr. Dashwood and his greedy wife Fanny, the four Dashwood women need to look for a new home. Left with no other option, they rent a modest home, Barton Cottage, on the property of a distant relative, Sir John Middleton. It is there that two of the sisters, Elinor and Marianne, experience romance, love, and heartbreak. 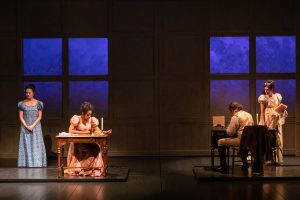 Under Amster’s impeccable direction, the quality of the acting was stellar. Standing out were two actors with local ties. One was former Indy resident, the previously mentioned Lindsay and current resident, Devon Matthias. What they both have in common is their extraordinary talent as accomplished character actors. Lindsay was a sheer delight to observe as the fussy, meddling Mrs. Jennings and Mathias, playing three different characters, including the mean-spirited Fanny Dashwood, was, indeed, a marvel to behold as she handily practiced her craft.

Once again, in possession of a generous budget making its high-end production values possible, the IRT put its best foot forward with a set by Ann Sheffield with contemporary lines, which incorporated marvelous images created by projections designer, Mike Tutaj. Contributing to the production’s elegance were the 19th-century romantic-style costume designs of Tracy Dorman and the resplendent lighting design of Dawn Chiang. Composer Michael Keck was responsible for the effective mood setting throughout the play. Also deserving of recognition is dialect coach Connie Deveer, who ensured that the British accents employed by the cast sounded authentic and were consistent.

For tickets and information about IRT’s highly engaging “Sense and Sensibility” which runs through October 9, visit irtlive.org.