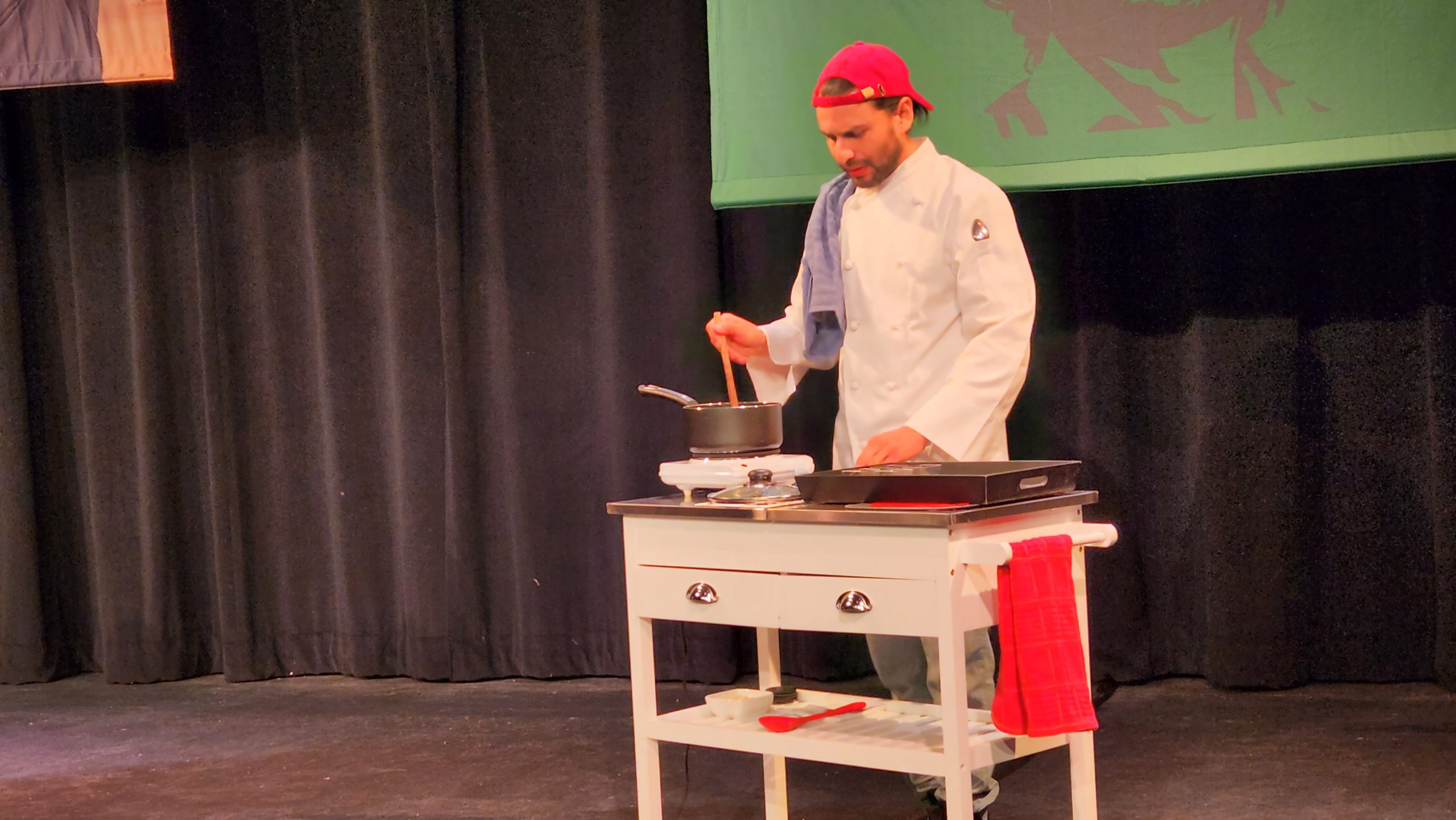 Adrian Parades – Courtesy of The District Theatre. Used with permission.

You have to hand it to Pauline Moffat, former IndyFringe CEO for 15 years, who is now the general manager of The District Theatre. Not only is she one of Indy’s most successful entrepreneurs, but the former PR exec from Australia also really knows how to promote a show, or at least convince others to do so. I commended her on her skills in person, following “Qaddafi’s Cook,” which I saw Saturday night at Moffat’s current domain. What piqued my interest in attending was an oven mitt with a ribbon tied to it along with an attached personalized printed note from Moffat and info about the show. Plus, she sent it to me on a day I was on the air at WISH-TV Channel 8, where I am a performing arts contributor on “Life. Style. Live!” — a daily lifestyle program. Handing out promotional tchotchkes to media members was once de rigueur as practiced by PR and advertising firms but not so much anymore. But take note — they work. This review is proof.

I thoroughly enjoyed “Qaddafi’s Cook” for multiple reasons. Written by the late Lance S. Belville and Carlos Ambrosi, both Mexicans, the drama is based on a true story about the latter who is a professional chef. Given the fact that I am of Mexican origin and a foodie, I have also long been fascinated with the life and death of Libyan dictator Qaddafi, who was ousted and killed by rebel forces in 2011, so I was already predisposed to appreciate this work.

The often charming but tension ridden 70-minute drama follows the story of Fredy, a Mexican chef who is hired by Qaddafi to cook for him. At the play’s onset, we see an unnamed FBI agent (Lynn Lohr who is also is the show’s director) sitting in a Federal office in Mexico City reading from a journal kept by Mexican chef Fredy (Adrian Paredes), about his experiences working for Qaddafi. As the agent reads aloud, Fredy adds and even interrupts the narrative with details. As the two go back and forth, the story becomes a conversation with the agent reading to herself while Fredy talks to the audience. Fredy and his fellow chefs are kept to a strict routine and follow rigid and seemingly petty rules. And like all Libyans, they live in abject fear and trepidation under the rule of a madman dictator. As the exchange between the two characters took place, Paredes as Fredy prepared dishes, on a cart equipped with a hot plate and other kitchen items. After completion of each dish, he served tasting portions to audience members in the front row.

Lohr’s acting, though primarily limited to serving as a narrator, was solid as she made occasional emotional responses to Fredy’s stories that alternated between both humorous and harrowing. Paredes was likable and engaging as Fredy, as he frequently traversed the stage, employing differing accents of other characters in the story, as he spoke in his own thick Mexican accent.  Paredes who is a multidisciplinary artist (acting, dance, plastic and visual intervention, live coding and synthesis, video mapping and light/sign installations). Paredes, originally from Pachuca, Hidalgo, is now a resident of Mexico City.

In its promotion of “Qaddafi’s Cook,” the event was billed as a “Latino Tasting Plate” in that besides the play, the evening’s activities included a tasting of some of Qaddafi’s dishes prepared by chef eorge Munoz of Festiva Restaurant and an art exhibit of work by Mexican American painter Gerardo Mares, a resident of Milwaukee. According to Moffat, “Qaddafi’s Cook” is the first play written by a Latino playwright to be presented by the District, so kudos go to her for showcasing Latino culture, food, and art through a sampler that was not only creatively but inspiring as well. The District’s acknowledgment of the presence of an ever-burgeoning Latino immigrant community in Central Indiana deserves applause.