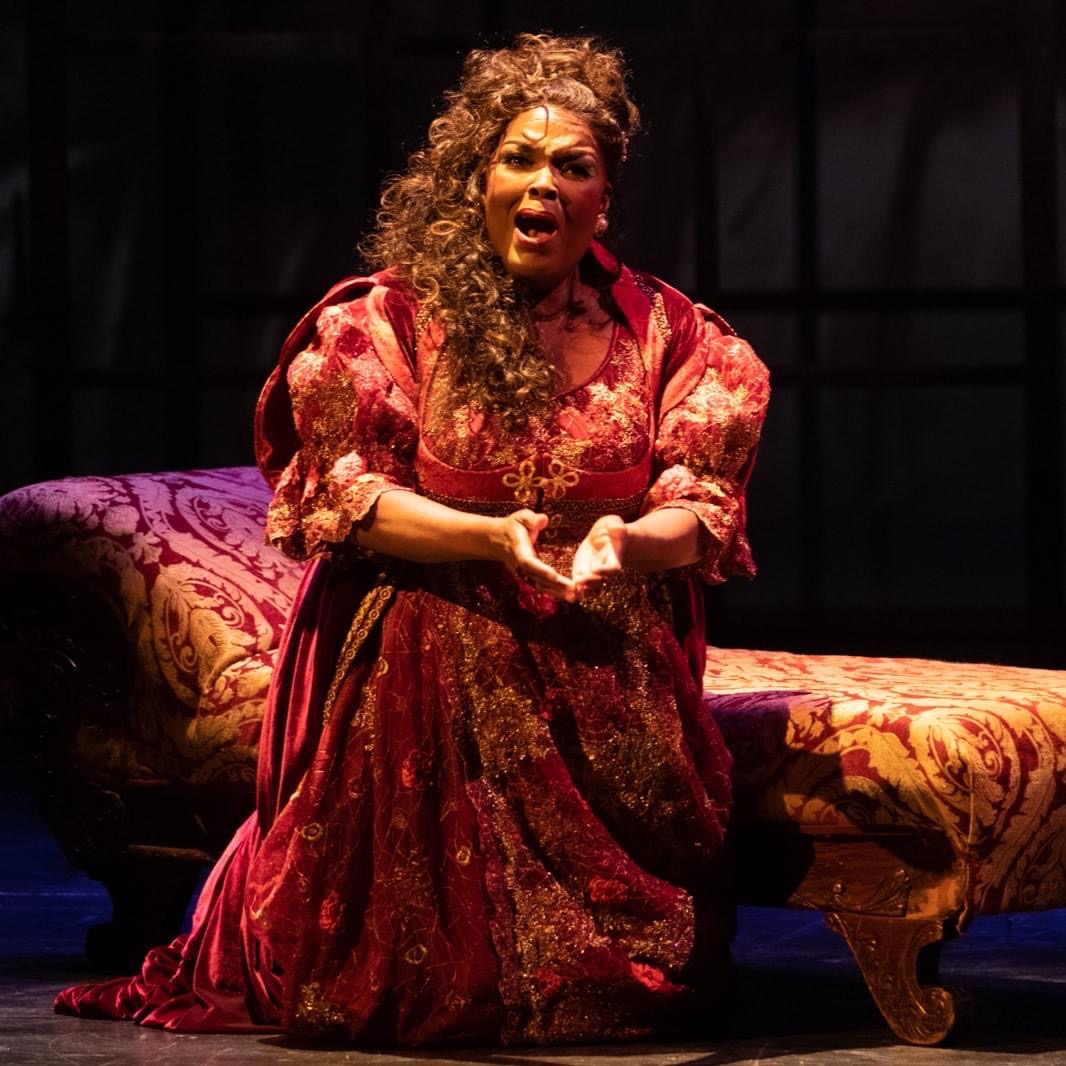 Not only is homegrown soprano Angela Brown one of the opera world’s most accomplished singers, but she is also regarded as an Indianapolis community treasure. That sentiment was clearly expressed by an electrified audience when she sang the title role in “Tosca,” presented by Indianapolis Opera Friday at the Tarkington Theatre at The Center for the Performing Arts in Carmel. 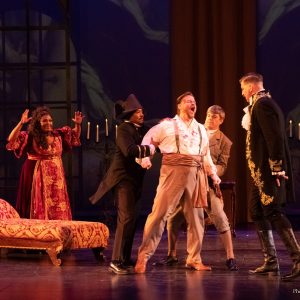 Now in its 49th season, Indianapolis Opera, the organization, for purposes of cost cutting, significantly scaled down its productions since General Director David Craig Starkey took the helm in 2016. Consequently, the lavish, expensive productions that IO previously held at its former home, Clowes Hall, are a thing of the past; however, happily, their current product, presented in more intimate settings, is also more inclusive and accessible. Those advances were reflected at the performance Friday in the multigenerational, racially diverse, and more casually dressed audience than one would have seen at the opera in years past.

In the wake of the racial reckoning sparked by the Black Lives Matter movement, the arts have been in the vanguard of change as evidenced by non-traditional casting in the theatre, which has fortunately become more and more common. Recent examples of that trend were exhibited locally when a Black actor, Veronica Stern, played the title role in a touring Broadway production of “Anastasia” and actors of color played leading roles in the Indiana Repertory Theatre’s “Sense and Sensibility,” including Cereyna Jade Bougouneau and La Shawn Banks.

Despite its reputation as elitist, the opera world, to its credit, has a long history of showcasing Black artists, starting with icons such as Paul Robeson, Jessye Norman, Simon Estes, Leontyne Price, George Shirley, Marian Anderson, and Grace Bumbry. Added to that stellar list is Brown, a Crispus Attucks High School and Oakwood University alum and IU Jacobs School of Music graduate student, who made her critically acclaimed Metropolitan Opera debut in the title role of Verdi’s “Aida” in 2004.

I first saw Brown perform in 1983, alongside film star Ginger Rodgers, in a Civic Theatre production of “Miss Moffatt,” directed by the legendary Josh Logan. Over the years, I have reviewed several operas she has appeared in, as well as two ISO “Yuletide Celebration” shows,
an Indianapolis Symphonic Choir “Festival of Carols” concert, her educational concert “Opera…From a Sistah’s Point of View,” and have interviewed her several times, including once during the COVID lockdown here. I knew what to expect upon seeing Brown’s “Tosca” — it was a masterful performance, impeccably delivered.

“Tosca,” a three-act opera, was written by Giacomo Puccini, with a libretto by Luigi Illica and Giuseppe Gicosa, and premiered in 1900. Set in Rome in 1800, “Tosca” is a melodramatic political thriller that takes place during the Napoleonic wars at a time of great political unrest. The plot, with action that takes place in less than 24 hours, revolves around three main characters — Diva Floria Tosca; her lover Mario Cavaradossi, a painter; and the villainous and corrupt chief of police Baron Scarpia.

The role of Tosca is not unfamiliar to Brown, who has performed it several times previously, as well as other Puccini roles that require the power and passion with which she infused her IO performance – a large, seasoned voice and charismatic stage presence. Also displaying her formidable acting skills, Brown was totally convincing as the fearless, fiery, yet vulnerable Tosca, who refuses to be victimized in a tragic love story that resonates with contemporary social and political mores that are still prevalent. During Brown’s breathtaking rendition of the famous aria “Vissi d’arte” (“I Lived for Art”), an imitate and despairing prayer, sung by Tosca as she faces the torture and execution of her lover Mario at the hands of Scarpia, one could hear a pin drop. I and everyone in the packed audience were held spellbound by Brown’s exquisitely poignant rendition that brought down the house with enthusiastic applause and yells of “Bravo” and “Bravissimo” heard throughout. 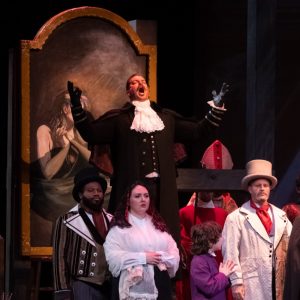 Also turning in a dynamic vocal and dramatic performance as Tosca’s lover, Mario Cavaradossi, was Gregory Turay, another singer I have been impressed by during his previous appearances with IO. Additionally, bass Andrew Potter, as evil Baron Scarpia, referred to as “larger than life” in his program bio, literally fit that description.  At six feet ten inches tall, Potter’s potent vocal and acting talent matched his imposing height.

Though the production’s costumes were subpar in their design and execution, presumably due to budget restrictions, Valeriya Nedviga’s scenic design, featuring appealing backdrops and props drew me into the story, as did Tilman Piedmont’s effective lighting design that complimented it.

For a city proud of its celebrities stretching all the way back to entrepreneur Madame C.J. Walker, writers James Whitcomb Riley and Kurt Vonnegut to such current luminaries as Babyface, David Letterman, Jane Pauley and many others, Brown is yet one more we can all embrace for her contributions to not only opera, but also for her work as a humanitarian and educator. Experiencing this rare talent on a stage named after yet another Hoosier cause célèbre, novelist Booth Tarkington, in a role she was born to play, was a singular performance I will long remember.