‘The Great Comet’ Boldly Bursts Onto Stage At IU 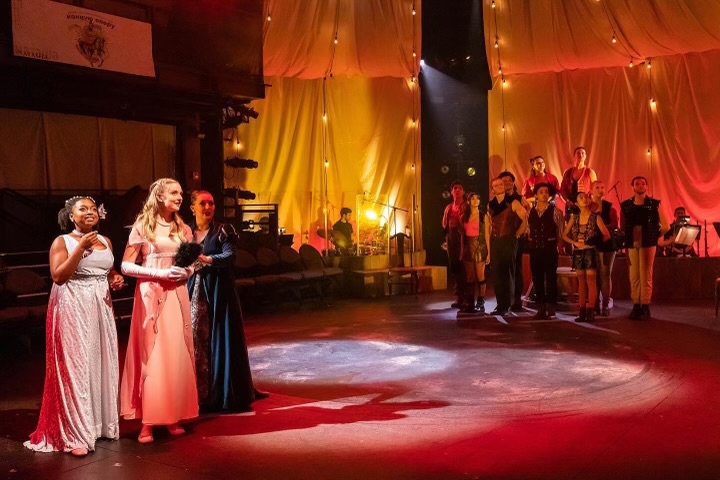 I regret that it took me so long to finally experience the explosion of talent and creativity I witnessed at Indiana University in Bloomington Thursday when I saw the Indiana premiere of “Natasha, Pierre, and the Great Comet of 1812.” Presented by the IU Department of Theatre and Dance, the sung-through musical was written by composer and lyrist Dave Malloy and adapted from a 70-page segment, part eight, of Leo Tolstoy’s 1896 novel, “War and Peace.” The musical centers on Natasha’s affair with Anatole and Pierre’s existential crisis. 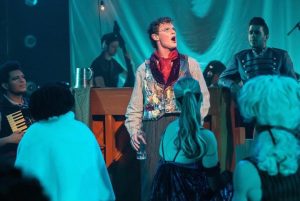 As far as the musical’s history, “The Great Comet” premiered on Broadway in November 2016 at the Imperial Theatre, closing in September 2017.  Josh Groban starred as Pierre. To my knowledge, with this IU production, the musical is receiving its Indiana premiere.

Set in Moscow in 1812, the same year that Haley’s Comet blazed across the firmament and during a time when the Napoleonic Wars are raging, the “The Great Comet” story follows the romantic and guileless Natasha who arrives in Moscow longing to be reunited with her soldier fiancé, Andrey. There she meets the devil-may-care, yet roguish Anatole with whom she falls deeply in love, despite her engagement, and unbeknownst to her, Anatole is married. Stepping in to save her reputation and that of her family, is a friend of Natasha’s godmother Marya, the angst-ridden Pierre, who heroically intervenes on her behalf. Ultimately, Natasha and Pierre both undergo redemption because of their connection.

Deserving of praise for his deft guidance of student actors in his charge was director Richard Roland. Featuring a cast of 18 triple-threat performers, those in leading roles were all exceptional. They included Tiana Williams (Natasha), Jacob Jackson (Pierre), Kabir Gandhi (Anatole), Katie Wheeler (Sonya), Kate Glaser (Marya), Hannah Zeldin (Hélène) and Justin Todd (Dolokhov). But that is not to say that those in the ensemble, many of whom played multiple roles, weren’t also individually stellar. The acting, vocals, and dancing exhibited in the production were of the highest professional caliber.

Referred to as an “electro pop opera,” with its hybrid mix of rock and cabaret, “The Great Comet” was a singular theatrical experience.  Led by music director Ray Fellman on keyboard, the orchestra consisted of 13 musicians. And further contributing to interpreting Malloy’s vibrant score were four roving musicians. The fact that the musicians, presumably, are all receiving their training through the IU Jacobs School of Music, one of the best in the country, accounted for their excellence.

As far as the show’s production values, which were first-rate, I can’t say enough about Maggie Jackson’s scenic design that featured a circus big top-like setting that was festooned with large strips of fabric decorated with lights and an elegant, grand chandelier that was suspended high above in the arena-style playing area of the Wells-Metz Theatre. Contributing to the lavish spectacle was Corey Goulden-Naitove’s vivid lighting design and the beautifully constructed Empire-era costumes of Brittany Staudacher. Responsible for the production’s impeccable sound design was Abby Hughes. 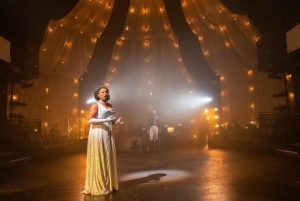 A highlight of the show was its spectacular choreography, created by Lauren Haughton Gillis. It included some fiery Russian folk dancing, the movements of which were exuberantly executed by the cast of uber-energetic performers.

In the spirit of full disclosure, I wish to share that the reason I saw the production in the first place was because Tiana Williams reached out to me a few weeks ago to inform me that she had the lead in the show and hoped that I would attend. Williams, whom I regard as a both a mentee and friend, originated the role of the iconic entertainer Josephine Baker in “Calder, The Musical,” an original work that I created along with my collaborator, Dustin Klein, through our Klein & Alvarez Productions, LLC, and which premiered in Indianapolis in 2017. So, it was with great interest and anticipation that I wished to see how much Williams had matured and grown as a performer from the high school senior she was when I first met her to the young woman she has become and who is set to embark next year on a professional career in the theatre.

A grateful product of the educational theatre realm myself, I have a deep affinity for college theatre students, so it was with eagerness that I took in the IU production and was thrilled that I did. Any one of the emerging artists I saw in Bloomington that night could step onto a Broadway stage right now and hold their own quite easily. I for one look forward to following their careers, knowing that I “saw them when.” Don’t miss this opportunity to see the musical stars of tomorrow through November 12.

For tickets and information about “Natasha, Pierre, and the Great Comet of 1812” visit theatre.indiana.edu.

‘Violet’ Is Abundant With Vivid Performances