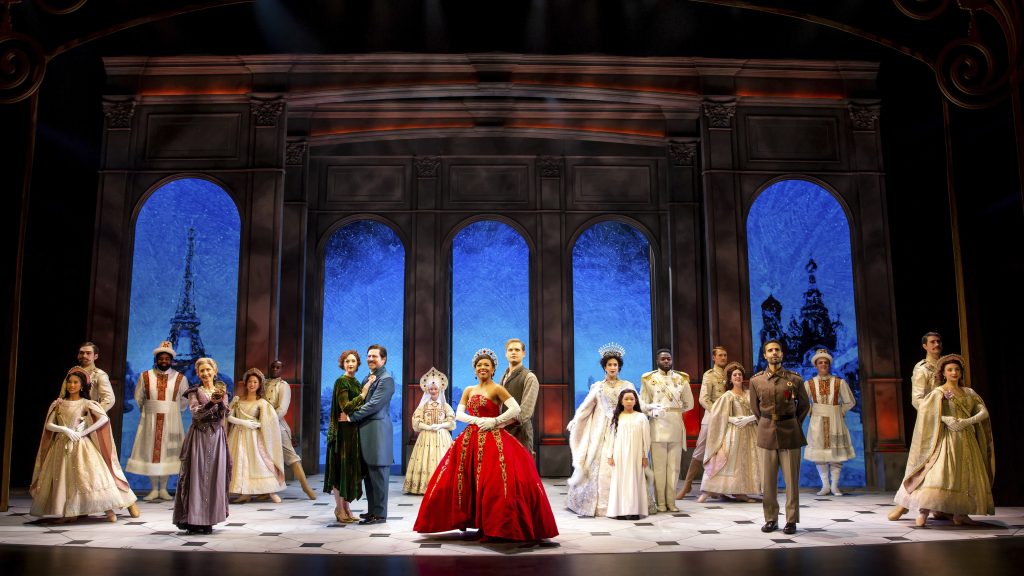 “Anastasia” -Courtesy of Broadway in Indianapolis, Used with permission.

A student of Russian history, I have always been fascinated with the brutal and shocking murder of Czar Nicholas Romanov II, his wife, and their five children by Bolshevik revolutionaries in July of 1918. I am also a fan of the 1997 20th Century Fox movie, “Anastasia,” an animated musical film that is based on the legend of the Grand Duchess Anastasia, the 18-year-old amnesiac orphan, Anastasia “Anya” Romanova, who could have escaped the execution. Later, she is aided by two con men, who collude in an attempt to convince the dowager empress, Maria Feodorovna, that Anya is her beloved granddaughter. So it was with great anticipation that I joined a full house to see the stage musical play adaptation of “Anastasia” on Tuesday at the Murat Theatre at the Old National Centre. I was not disappointed. In fact, it was much more than I expected

The stellar cast included Veronica Stern as Anya, Willem Butler as Dmitry, Ben Edquist as Gleb, Gerri Weagraff as Dowager Empress, Bryan Seastrom as Vlad, and Madeline Raube as Countess Lily. They were joined by an ensemble of 18 vibrant, triple threat performers.

Veronica Stern as Anastasia – Courtesy of Broadway in Indianapolis. Used with permission.

Having recently interviewed Stern (click here) who played Anya, I was curious and eager to witness her performance. Once again, I was anything but disappointed. Making her debut as a lead in a Broadway touring show, she was triumphant. Possessing a pure and pristine soprano voice, her solo renditions of “In My Dreams,” A Secret She Kept,” and “Journey to the Past,” were absolutely breathtaking. Stern’s outstanding acting talents were also effectively on display in her nuanced portrayal of the kind-hearted, fiercely independent and driven Anya, hoping to discover her true identity.

“The New York Observer” quote, “One of the most gorgeous shows in years,” used in the tour’s press promotion, is not just hyperbole. The show’s production values are first-rate as evidenced by its sumptuous lighting design, lavish costumes, and sets. Particularly impressive were realistic video images depicting various locations such as the Russian royal palace, a train station, and scenes of Paris, projected behind a proscenium set piece.

“Anastasia,” replete with visual and auditory splendor, is charming, inspirational, and pure escapism for all ages. And most of all, with its messages of hope and finding love, it is simply heartwarming and uplifting food for the soul.

“Anastasia” plays at Old National Centre through Sunday, Oct. 23. Tickets are on sale and available now at ticketmaster.com. The performance schedule is Thursday evening at 7:30 pm, Friday and Saturday evenings at 8 pm, Saturday matinee at 2 pm, Sunday matinee at 1 pm and Sunday evening at 6:30 pm. “Anastasia” is part of the 2022-2023 Broadway in Indianapolis series.