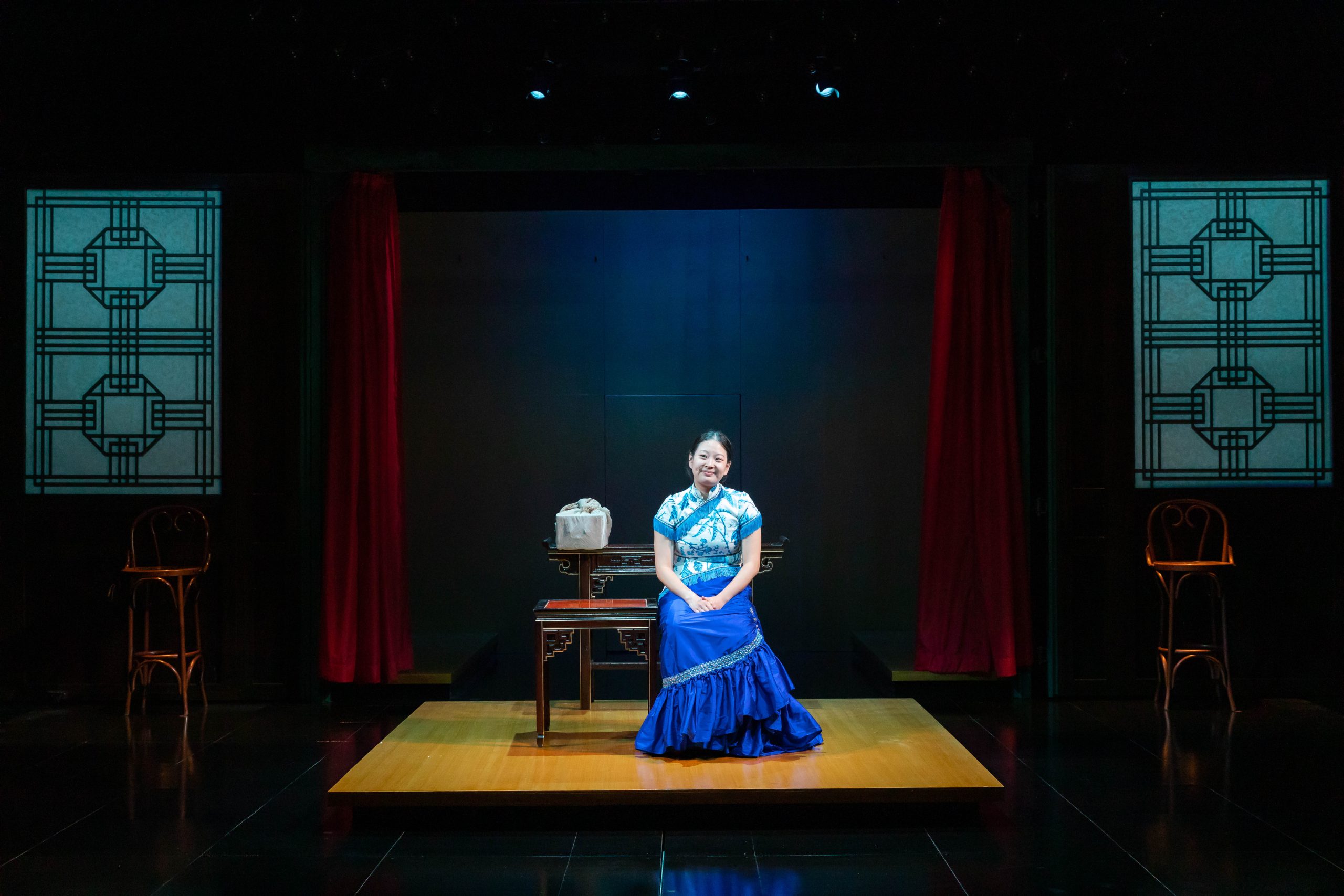 Mi Kang as “The Chinese Lady” – Photo by Zach Rosing. Used with permission.

The Indiana Repertory Theatre’s Upperstage, offering a warm intimacy within its three-sided seating confines, is one of my favorite Indy venues and the ideal space for its presentation of Greenwood native Lloyd Suh’s compelling play, “The Chinese Lady.” I attended the show’s Friday night opening performance of the Indiana premiere that is the first of two productions that are part of the INclusion series within the IRT’s 50th Anniversary Season. 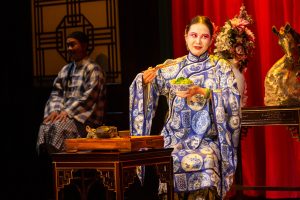 Suh’s disturbing play, which documents the hatred and brutality Chinese immigrants have endured in this country for centuries, was first staged at the Ma-Yi Theatre Company in New York in 2018. This was prior to the pandemic and former President Trump’s coining of COVID-19 the “China Virus.” Tragically, his promotion of the erroneous term created a reactionary hysteria, sparking irrational violence against Asian Americans that continues unabated today.

Based on a true story, the drama centers on Afong Moy, a 14-year-old girl who arrives by herself in New York City in 1834. She was advertised as the first Chinese woman to set foot in North America. Brought there as a result of a deal her father made with American merchants, she is put on display in a P.T. Barnum Museum. Known as “The Chinese Lady,” Afong May is promoted as a curiosity. Believing that she is fostering cultural awareness and understanding, and clueless about the racism against her people, the upbeat, naïve teen cheerfully eats with chopsticks, demonstrates the tea ritual, and walks around the room in her bound feet. The show she puts on is performed for a crowd that pays to gawk at her as a caricatured version of Chinese culture. In this IRT dramatization of Afong Moy’s story, those in attendance are her audience. 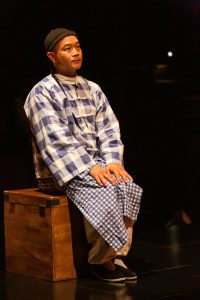 In the beginning of the play, Afong is curious and filled with optimism and excited to encounter American culture. The drama is unencumbered by linear time, allowing her to exist in 1834 but able to reference the Opium Wars that are years away. Over the course of the drama, years pass and Afong’s initial positivity fades as she confronts topics such as America’s westward expansion, in which the Chinese population is exploited to build the transcontinental railroad and later terrorized, persecuted, and even lynched – not to mention the restrictive immigration and labor laws that were outrageously discriminatory.

Little is known about Afong, the exploited woman touted as “The Chinese Lady,” including her real name and her background, but for the audience, Suh provides a window into her inner thoughts.

In this fascinating two-hander, Afong is joined by Atung, her expressionless interpreter about whom her feelings shift over the course of their years spent together while on display in the museum. Playing the charming Afong May was Chicago actor Mi Kang, a who is required to age throughout the play and does so effortlessly. In the role of Afong’s dispassionate exhibit companion was Trieu Tran as Atung, who also thoroughly shined. Adding to the solidness of their performances is the fact that both actors have played their respective roles in other productions around the country.

Often touching and even funny at times, the 90-minute narrative was keenly directed by Ralph B. Peña, who developed the play with Suh. The fact that he also directed the original production makes his involvement a definite plus for IRT audiences. 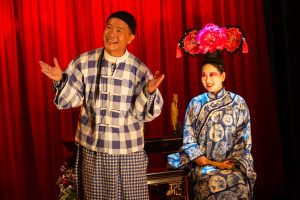 As is typical of IRT, the production values and elements are top drawer. The diorama-like set that starts as a shipping container holding Afong’s physical exhibit was ingeniously designed by Junghyun Georgia Lee. Designer Linda Cho contributed the show’s spot-on period costumes. Oliver Watson created the lighting design that made for an often-melancholic atmosphere, and Fabian Obispo, who composed the music for the original New York production, reprised his stunning work for this IRT interpretation.

In September, “New York Magazine” ran a feature story regarding hate crimes targeting Asians, currently an epidemic in this country. The cover illustration depicts an Asian woman with items of self-protection that include pepper spray, a stun gun, a personal panic device, and a knife. The chilling story reinforces that Suh’s vital play could not be timelier. Moreover, this compelling piece is an informative primer about the history of Asian persecution in the U.S. for anyone invested in combatting racism and xenophobia in all its malignant and repugnant forms. Always in the vanguard of shining light on political-social issues throughout its long history, IRT once again provides a critical public service with this lustrous theatrical gem.

“The Chinese Lady” continues through November 6. For tickets and information visit irtlive.com.