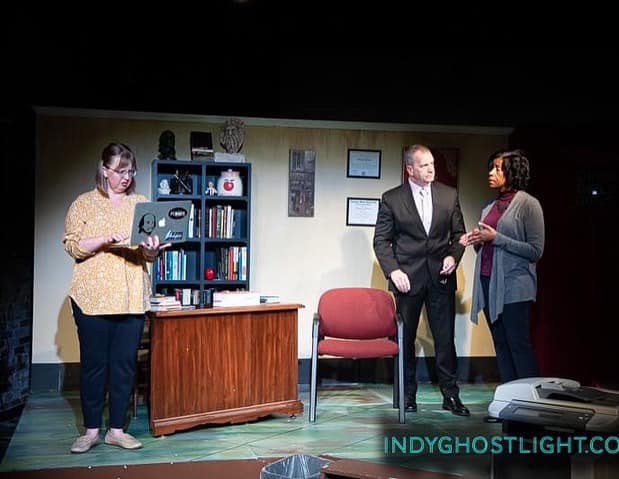 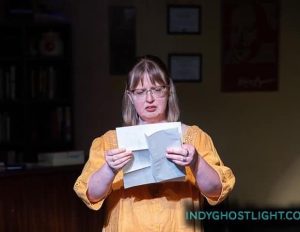 Let me say on the onset that it is always inspiring to see new work written by local playwrights. Such was the case when I viewed Southbank Theatre Company’s production of Marcia Eppich-Harris’ “The Profession” Saturday at Fonseca Theatre Company.

Eppich-Harris’ often gripping drama, centers on Dr. Valerie Hardy (Becky Schlomann), a dedicated English professor at a small Catholic liberal arts college, who has been denied tenure, which for her has devastating consequences. A salacious subplot involves Hardy’s favorite student Marina Dekker (Trick Blanchfield), who moonlights as an exotic dancer to finance her education. Though each character faces very different obstacles, what they share in common are toxic systems and attitudes that threaten their livelihoods, dreams, and goals.

For the most part, except for a plot situation that stretches credulity, I found that Eppich-Harris’ play was not only well-constructed, with plausible characters, but it kept my interest throughout. I was especially impressed with Eppich-Harris’ dialogue, which rings true. I couldn’t help but wonder how much of the former Shakespeare and dramatic literature professor’s play was autobiographical. Certainly, Eppich-Harris’ background gives this piece undeniable credibility and gravitas. 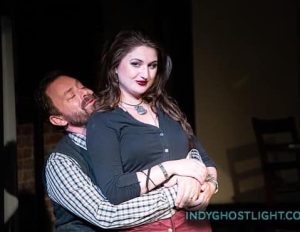 As far as performances, Schlomann excelled as assertive, outspoken Valerie, as did Blanchfield as intellectually curious and principled Marina. In contrast, among the supporting cast members, the level of acting was inconsistent, with some more convincing than others. That may have been due to lack of experience and training, Elisabeth’s Speckman’s uneven direction, or a combination of both.

Recognizing the challenge associated with creating a set for the limited space available on the Fonseca stage, I could not help but be distracted by the ambitious design in which less would have been better. A bare stage, with targeted lighting, minimum furniture and set pieces might have proven more effective.

On the plus side, Eppich-Harris, founder of Southbank Theatre Company, deserves props for the tenacity, strength, and courage it takes not only to create original work, but also put it out there. Given the current social-political climate, I believe Eppich-Harris’ play, which highlights critical women’s issues, but has universal appeal (even for men), has the proverbial legs to find a wider audience.  I presume she will take to heart any feedback she receives to tweak her script, then publish this important, resonant work to share with the rest of the world.

For tickets and information about “The Profession” visit southbanktheatre.org