Recently I had the opportunity to sit down at The Cabaret with artistic director and CEO Shannon Forsell to chat about the fall-winter season at the retro style venue which has been recognized for its status as “the undisputed Midwest home for cabaret entertainment,” featuring some of the biggest names on Broadway and the worlds of jazz and international fare.

Below is an edited transcript of my conversation with Forsell.

Describe the process of choosing your new season. Like a puzzle, right?

This season was really complicated compared to other seasons because Broadway started at the same time for everyone. So when everyone signs a contract, it is a six-to-nine-month contract. Usually, they are scattered contracts. We try to get folks who are in the news, currently in shows or recently in show. There was no one who was recently in anything because for two years there wasn’t anything due to COVID-19. Everyone is currently in a show or getting back to work on the same length of contract, so most contracts we were looking at ended in November. Many didn’t have an out, so moving people around was a little more complicated this year because of Broadway being on the same schedule for the first time.

There is a perception among some that The Cabaret only features Broadway stars. Is that accurate?

Well, we have a Broadway series to fill, The Glick Philanthropies at The Cabaret Broadway Series, an international series, and a jazz series. So we do not just present Broadway. We started to shift slightly from the Great American Songbook because we knew Feinstein’s at Hotel Carmichael was going to focus on that, so we felt that it would be better for us to play together as opposed to being competitors. Cabaret is a very large umbrella, but our Broadway series is our biggest selling series so that is what we have determined is what audiences want. That is what sells. That is what they are asking for. That is what they are asking to sponsor.

Do your audience members see shows on Broadway? Are they savvy?

Many have. Our audiences really like the acting piece of the cabaret element that Broadway folks bring and the combination of the vocals with the acting. They are really good at what they do.

Exactly what are you doing is expand your programming to showcase the whole umbrella of cabaret? 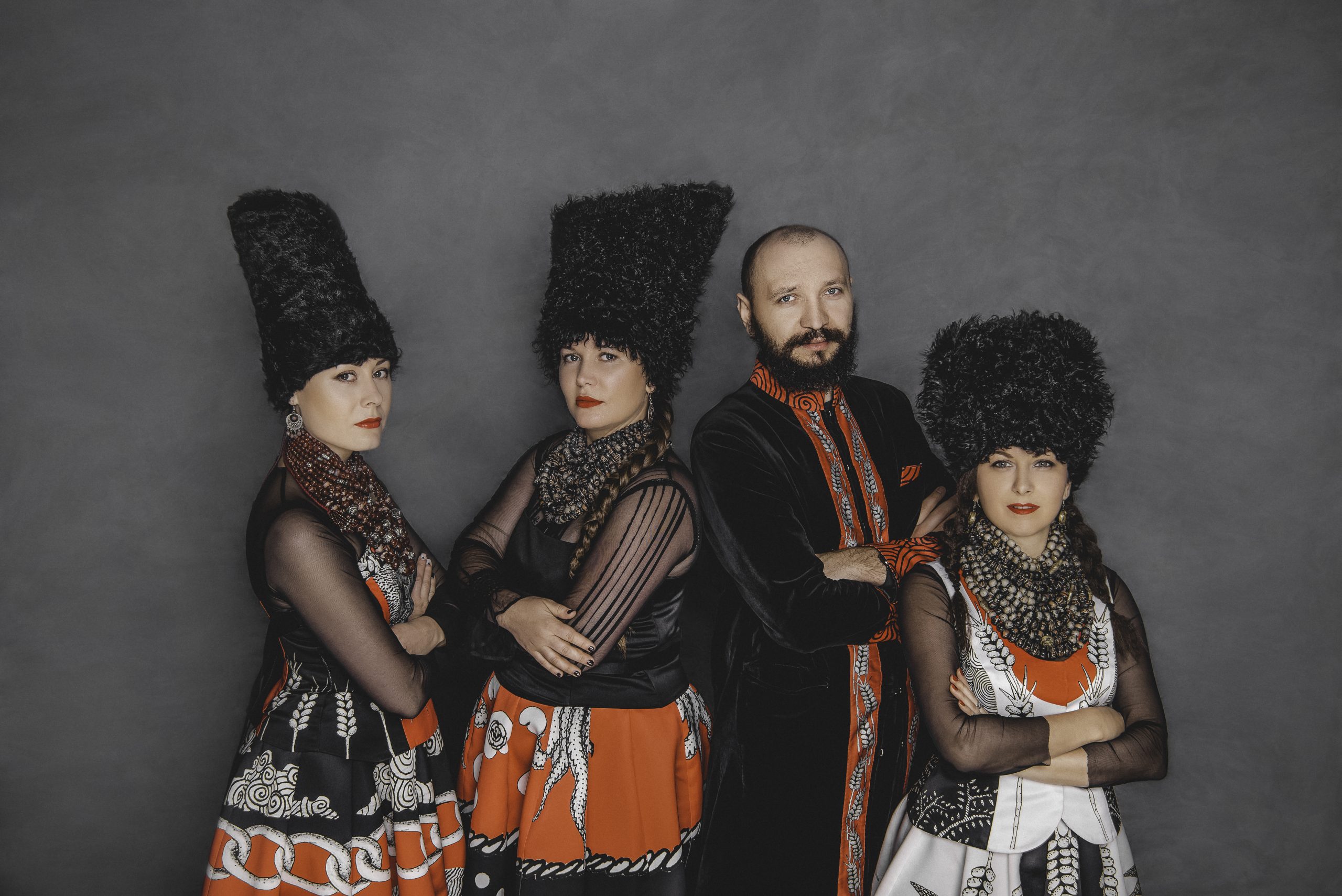 DakhaBrakha – Courtesy of The Cabaret. Used with permission.

We are really excited about DakhaBrakha which is a Ukrainian cabaret group. They are very hot right now. They started their U.S. tour when the war broke out. The joyful music they chose to do on their tour changed as their tour went on.  They were supposed to go home sooner. The tour was supposed to end in May, but they are still here in the states.  They are playing big rooms, 2000-seat rooms. We are really excited to have them in a small room. We were looking at them last year just because they are amazing. Their material is very international, very global, and some of them are multilingual but some. They blend all kinds of global music, but it is also very cabaret. As time goes on, they have changed their show. It is a more urgent show than it used to be and has more anti-Putin material in it. We’ll also provide opportunities to give aid. We had planned to book them before the war ever began and now, of course, they are doing everything they can to raise awareness about that situation, and seeking aid is of utmost importance for them right now.

What is your message to those who have not yet experienced The Cabaret?

Come and try it. It’s an intimate art form with lots of various styles but the differential scenarios mean that it is a three-way conversation between the artist and the audience and the song. It is much more rooted in the storytelling through song, and it’s engaging. Folks liken it to being in a living room—as if this artist is in your living room. You are a part of their experience. Their show is different depending on who’s in the audience, and I can attest to that. The artists are getting something from you, and you are getting something from them, too. You can sometimes talk to them. There is no fourth wall. We have lots of descriptions of cabaret and what artists say about it on our website.

It is a unique experience because it is a cross between theatre and nightclub and every show is different because it’s all based on the artist. The experience also includes engaging at tables and chairs and enjoying a beverage and meal. You can dress fancy or not. Regardless, we treat you as if you are a guest at our cocktail party. For those who might be intimidated about the experience or a little nervous about what is behind the door, I would encourage them to go to our website where we have videos of every performer, and they can get a sense of whether they will like their music or not.

What about those who are already Cabaret fans? Why should they come this season?

We are excited because sales are going very, very well, and it seems like audiences are excited about our shows, too. For us, it is another year of presenting the best of the best, so we are just continuing that trend and expanding on our core programming.

How would you describe your reputation with artists that you feature?

Ari Shapiro (NPR “All Things Considered” co-host, featured last season) posted on his Facebook page how amazing Indianapolis is and how he was treated when he was here at The Cabaret. Folks tell us at The Cabaret that we treat them the best they have been treated anywhere. We have a team of folks who care for the artists at each level of the experience. They are picked up by a driver and treated like stars. The experience begins when you book them and continues all throughout their special needs and their riders. They stay at Bottleworks and love it so much. We represent Indianapolis. We started out reaching out to artists and asking them to come. We knew Indianapolis at that time nineteen years ago was not exactly on performers’ bucket list to play and now artists call us. “I am doing another show. Can we do the show there?” and we are really thrilled about that. They love the venue. They like the room a lot. Many of them say it is one of the best rooms they have ever played.

For tickets and more information about The Cabaret 2022-2023 fall-winter season, visit thecabaret.org.