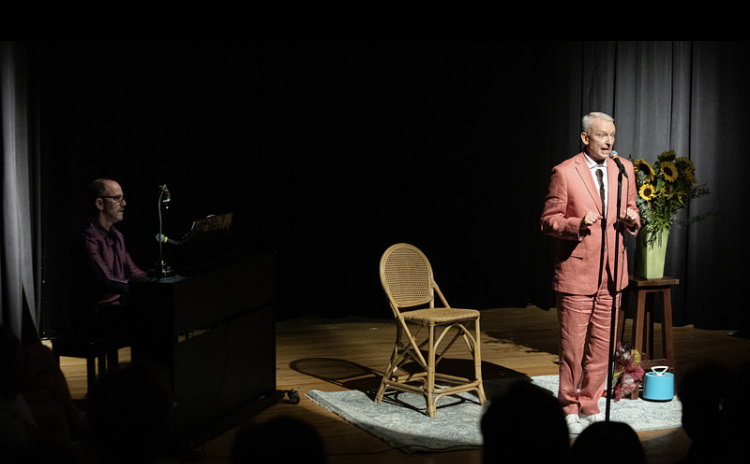 A few years back, I met cabaret performer Norman Lasiter after a Magic Thread Cabaret (of which I am managing director) show. Having recently relocated to his hometown of Indianapolis, he shared his experiences performing in New York and Palm Springs with me. At the time, I was very interested in his background, and Dustin Klein, my collaborator, and I even considered him as a potential performer in the series MTC presented at our former home in Carmel, The Cat. 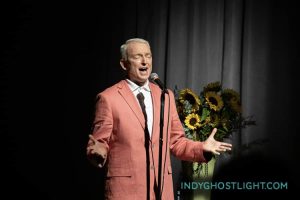 Fast forward to this year’s IndyFringe when I noticed Lasiter’s one-man show, “Gray Pride,” which would have a three-day run, on the festival schedule. I attended the Friday night performance and am happy to report that Lasiter’s show was much, much more than I expected. In fact, as someone who has reviewed countless shows at The Cabaret and now Feinstein’s at Hotel Carmichael, as well as clubs in New York and elsewhere, I count his act among the most entertaining I’ve witnessed.

Of course, much of my interest in Lasiter’s show has to do with the fact that he and I are both baby boomers, and because we are both gay, we share many of the same historical references.

Projecting an understated and low-key stage persona, Lasiter charmed a full house of what was clearly a supportive and appreciative audience, embracing his gentle manner and style of humor. Accompanied by his music director and friend of twenty-five years, pianist Christopher Marlowe, who once played for the late cabaret star Nancy LaMott, Lasiter performed a highly engaging set list.

Lasiter’s program was enhanced by several of Marlowe’s superb arrangements. Showcasing a voice that exhibited a surprising range and at times unexpected power. Lasiter also displayed substantial dramatic talent as a storyteller, both as an interpreter of lyrics and during his banter that included anecdotes about his career and personal life. I especially identified with his high school band experiences, singing in the New York City Gay Men’s Chorus, and losing friends during the AIDS crisis in the 1980s.

Lasiter opened his act with “Norman,” a pop song recorded by Sue Thompson in 1961 with lyrics such as “There’s a dress that I’ve got to sew and wear for Norman / Norman holds me close him / Norman kisses me and then / Norman knows my heart belongs to him and only him, oh.” The ditty set the tone for a entertaining show filled with nostalgia and campy humor. Other songs in his set list that I enjoyed included, Irving Berlin’s “I Love a Piano,” Joni Mitchell’s “Both Sides Now,” “Over the Rainbow,” and “Downtown,” made famous by Petula Clark. For an encore, he sang “Try to Remember” from one of off-Broadway’s longest running musicals, “The Fantasticks,” which has been revived with an all-gay cast at the Flint Repertory Theatre this summer.

One song which moved me in particular was often sung by the New York City Gay Men’s Chorus, according to Lasiter. Also performed by the Indianapolis Men’s Chorus (of which I was a six-year member) “Everything Possible.” written by Fred Small and recorded by The Flirtations, a popular 80s gay group,  the song includes lyrics such as, “You can be anybody you want to be / You can love whomever you will / You can travel any country where your heart leads / And know I will love you still / You can live by yourself / You can gather friends around / You can choose one special one / And the only measure of your words and your deeds / Will be the love you leave behind when you’re gone.” Nearly bringing me to tears, the tune was often sung by gay men’s choruses during the era of the AIDS epidemic, as a tribute to fellow singers who had succumbed to the vicious disease that wiped out thousands of gay men.

IndyFringe, which is noted for its mission of diversity and inclusiveness, deserves props for including Lasiter’s show in this year’s festival. Showcasing a performer and an age group that hopefully will be more represented in future festivals, the organization can only benefit from the richness and historical context that such offerings as “Gray Pride” provide for younger audiences.