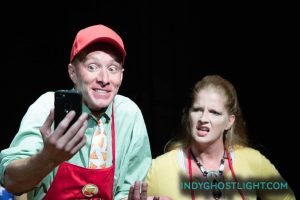 Magic Thread Cabaret, the company of which I am managing director, is presenting “Jewel Box Revue 2022,” in this year’s IndyFringe Theatre Festival. Consequently, my plate has been full and my time limited.  In the past, I have tried to review as many shows as possible, but this year, my packed schedule has not allowed me to sample only a few.  However, on Sunday I did have the opportunity to take in Casey Ross’ slapstick comedy “Tortillo! 3: Sombrero’s Revenge” at the IndyFringe Basile Theatre. Presented by Catalyst Repertory, which Ross co-founded, “Tortillo! 3” was also written and directed by Ross.

Having previously reviewed and been impressed with Catalyst’s last offering, dramedy “Lanista,” in July, I was keen to see this third installment of “Tortillo!” The previous two were also presented at past IndyFringe Festivals. Unfortunately, as I walked into the Basile to see the show, a video depicting the first and second installments of “Tortillo!” meant to bring the audience up to speed on the series, was nearly over. In the end, it did not matter, as “Tortillo! 3” stands well on its own and can be followed even if one has not seen the two installments that proceeded it.

I must admit that I had reservations about the show’s content based on the image used in the show’s marketing, depicting two of the show’s characters wearing sombreros. But upon seeing the show, it was made clear that the image is not meant to be offensive but rather, simply satirical. It is essentially an irreverent spoof of old sitcom stereotypes and the insensitive brand marketing of the 1990s.

Promoted as a “slap-stick snack food sitcom,” Ross’ cleverly conceived comedy’s wacky plot centers on Dave Dickens and employees of Tortillo, a stackable tortilla chip company (think Pringles), whose products have once again been tainted by cocaine.  Subplots include the return of celebrated drug lord “Sombrero” and former intern Patrick’s preoccupation with a new love interest. Filled with expletives (the show is not kid friendly), silly sight gags, and broad physical comedy, the screwball plot is secondary to the opportunity the show’s extremely talented ensemble has to entertain and tickle the funny bones of audiences who delight in irreverent humor. Without a single weak acting/comedic link in its ranks, the “Tortillo! 3” cast consists of strong performers, all of whom shared the spotlight but also had their individual moments when they shined brightly. As good as any comedy ensemble I have seen, anywhere including that of Second City and SNL, the cast consisted of Robert Webster, Jr. (Dave Dickens), Dave Pelsue (Patrick Plummer) of whom I am an unabashed fan, Matt Anderson (Steven Hensen), Trick Blanchfield (Madeleine), Lisa Marie Smith (Juniper Cox-Dickens), Ryan Powell (Mitchell Hensen), Tristan Ross (Ted), and Brian Kennedy (John Entwistle).

If there were awards given for IndyFringe’s best direction and playwrighting, surely Ross would be in heavy contention for creating what best typifies the “fringe” concept of the festival.

There are two more performances of “Tortillo! 3: Sombrero’s Revenge,” Thursday, Sept. 1 at 9 p.m. and Saturday, Sept. 3 at 1:45 p.m. at the IndyFringe Basile Theatre (venue 1). For tickets visit indyfringe.org.

Dustin Hopkins: Forever In The Stars