Dustin Hopkins: Forever In The Stars 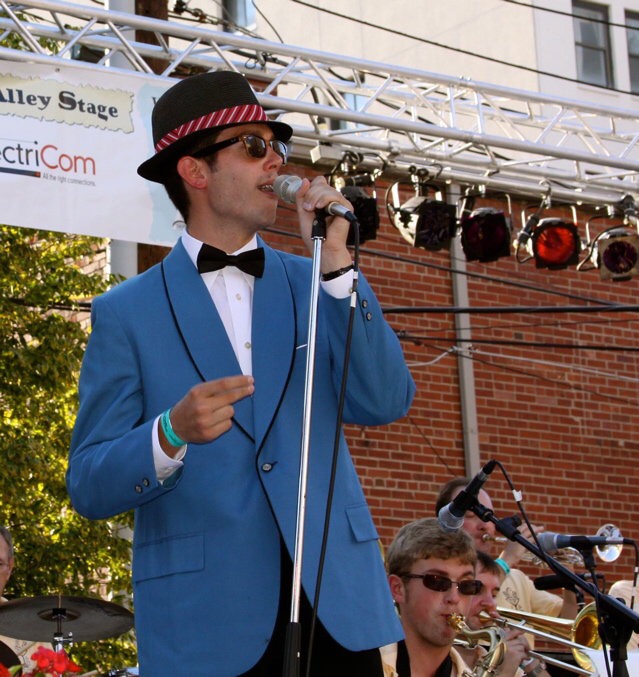 On Saturday, July 24, I attended “The Songbook Academy in Concert,” at The Palladium. Though it went virtual for two years due to COVID-19, this time the annual event was once again presented live. Featuring high school students from all over the country, the forty young artists performed songs from The Great American Songbook. My guest that evening was my Klein & Alvarez Productions, LLC, business partner and collaborator, Dustin Klein. Planning to join us was our mutual friend, Dustin Hopkins, a singer with The Big Band Swing in Lafayette, who had always wanted to attend this event and was finally getting his chance that night. By the time the concert began, however, Hopkins had not yet appeared, nor had he texted back and forth all day. Puzzled and alarmed, Klein remarked that it was the first time in their 20-year friendship that Hopkins had not communicated with him in a timely manner or simply not shown up for a planned engagement. 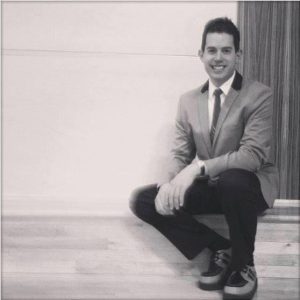 It was not until the next day that Klein learned that Hopkins had been admitted to Methodist Hospital where he was diagnosed with a brain tumor. Following emergency surgery on Thursday to remove the tumor, Hopkins experienced a stroke and was placed on life support. Friday, July 29, surrounded by family and close friends, including Klein who considered him a best friend, Hopkins died. His premature death at the age of forty-three was a devastating shock to his family, multitude of friends, and legion of fans in the Lafayette area.

Since becoming a business partner with Klein in 2016, he and I have developed a close friendship. As is common in such situations, we inherited each other’s friends, which for me happily included Hopkins for whom I shared a love of musical theatre, broadcasting and film.

For Klein, the loss is more profound. “Music brought us together. We were both twenty-one when we met at Metro (a bar on Indy’s Mass Ave) while singing standards on Karaoke night. We were both old souls and lovers of The Great American Songbook. Eventually, we became best friends, drawing even closer while performing together over the years. Dustin was always there for me and all his friends. He is an irreplaceable loss in my life. I will always treasure the magical years we had together,” said Klein. 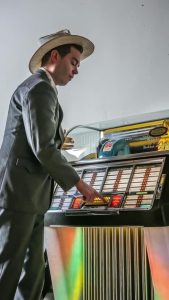 A 1997 graduate of Rossville High School, Hopkins participated in choir, the Baker Boys (a choir group), and the golf team. He received his B.A. in film studies from Purdue University. While at Purdue he sang with the Purdue University Glee Club with whom he travelled the world. Previously employed as a floor director at WLFI TV in Lafayette, Hopkins worked for Bob Rohrman Toyota for seventeen years, providing him with the opportunity to pursue his love of cars, which was just one of many of his interests.

Hopkins’ foremost interest was music. The front man with the Lafayette Swing Band and the Moonshine Mason Band, Hopkins was a popular figure on the Lafayette music scene according to Lafayette Swing Band leader Steve Cotton who said, “Dustin was a rare mix of talent and showmanship; he loved the songs he was singing. He knew the backstories of the singers, arrangers, and bands that the music came from.  He put all of that into his performance.  Dustin had a great sense of style and always dressed for the occasion. When he was in front of the band, he was playing a role, inviting the audience into the world created by the music. I think more than anything, Dustin always brought a smile to people’s faces. When he stepped up to the mic, people knew they were going to have a good time.”

Echoing Cotton’s sentiment regarding Hopkins’ impact as a performer is Gail Bliss, manager of The Big Swing Band, who said, “I met Dustin in 1997 at McGuire Music, a guitar store where I worked. One day he sang a song his high school quartet was working on and blew me away with the deep richness of his voice and his crooner style.  About four years later I saw him at the Purdue University Christmas Show, during his last year in the Glee Club.  By then I was managing and singing with The Big Swing Band and ask him to join us!  Everybody loved Dustin.  The band loved him. The fans loved him.  The dancers loved him. Not only did Dustin and I become good music buddies, but his mom Ann was there ready to lend a helping hand when she became our merchandising person. Dustin and I had some awesome duets such as ‘A Slow Boat to China,’ ‘I Won’t Dance,’ ‘Quando Quando Quando,’ and ‘At Last,’ but his specialties were anything Frank Sinatra or Bobby Darin.  He always stole the show. I miss him so. I am sad that I will no longer hear the cool swinging style of Dustin Hopkins dressed to the nines in his glamorous 1940s tuxedo or Elvis Presley jacket with our much-loved Big Swing Band.” 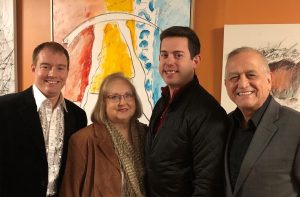 In becoming friends with Hopkins, I also became friends with his mother, Ann. Inseparable, it was rare that I saw one without the other. It was a loving relationship that I always admired for the closeness of their bond. Loyal supporters of Klein and me, together they saw all of our productions which included “Calder, The Musical, “and those in our Magic Thread Cabaret series. In addition, they attended all our fundraisers.

I reached out via email to Hopkins’ heartbroken mom, Ann, for words about her beloved Dustin. She related facts and shared information about him: “He was my son, my best friend, my North Star. He was an entrepreneur, a renaissance man, and an old soul in a young body. He was one of the youngest licensed antique dealers in Indiana when he was in junior high. His booth was called ‘Needful Things.’ He collected radios, cameras, and film projectors. Later he collected jukeboxes and had a 1952 and a 1938 jukebox when he passed. 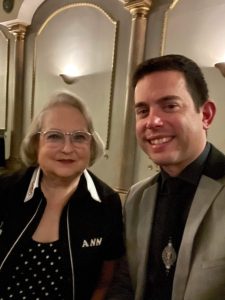 “He was the first person from his high school, Rossville, to be asked to join the Purdue Varsity Glee Club. He had many solos and especially loved the P. U. Christmas Shows in Elliot Hall of Music. His passion was music; he was born singing. He sang in three bands: country, Moonshine Mason and the Rotgut Gang; jazz, Rent Party; and swing, The Big Swing Band. He loved Merle Haggard, Johnny Cash, Bobby Darin—who shared his birthday and died at a young age—and Frank Sinatra—who died on Dustin’s birthday.

“On both our bucket lists was a road trip in a vintage convertible from Chicago, a town we both love, to Los Angeles on old Route 66. We were going to stop at every kitschy stop along the way. What a great trip that would have been. He loved musicals and the last one we saw was ‘Dear Evan Hansen’ in Indianapolis. Afterwards, we went to Forty Five Degrees, his favorite restaurant. I will cherish that memory forever.

“A dear friend of mine lost her daughter this summer too. She gave me a bracelet that says, ‘Remember to keep looking up. I’m forever in the stars.’ Yes, my beloved son, you are and always will be my shining star.”

A “Celebration of Life” for Hopkins is planned for October 1 at Thomas Duncan Hall, 619 Ferry Street, Lafayette, IN 47901. For more information contact Ann Ohl at annlohl@hotmail.com.

‘Spring Awakening: In Concert’ To Benefit Timely Cause