ATL Drama Is A Compelling Look At The Culture War 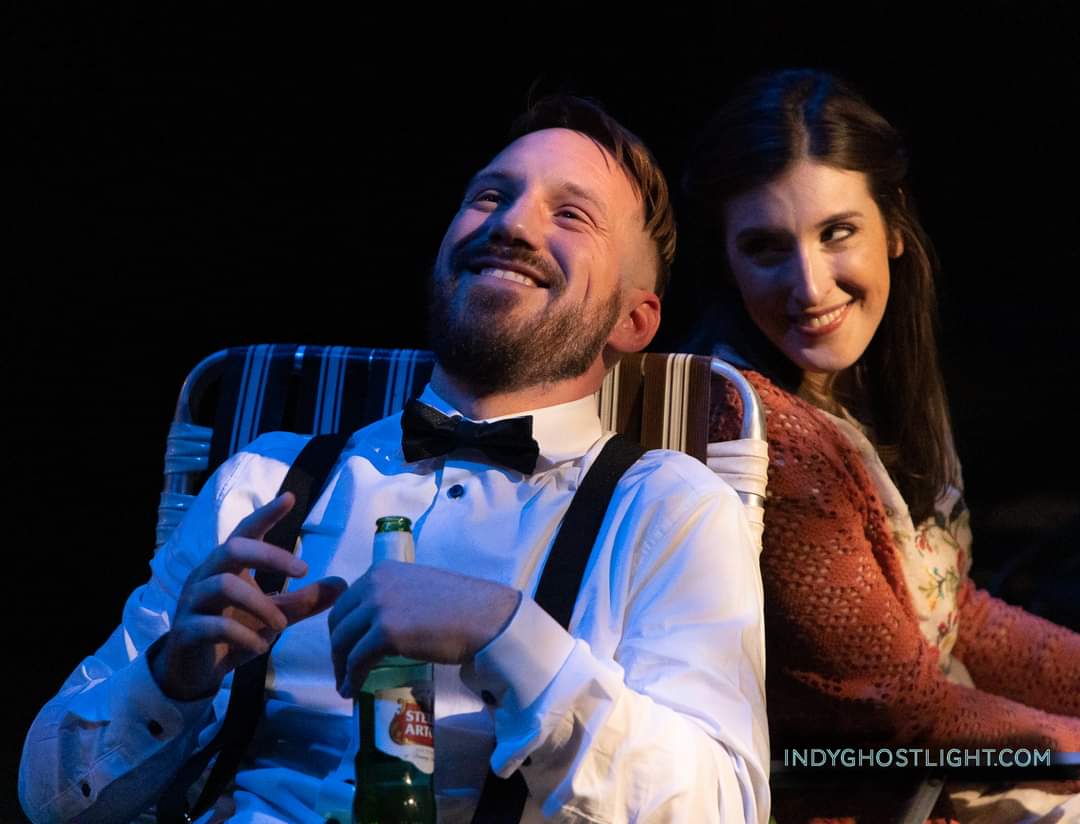 Continuing its critical mission to present “relevant, provocative and entertaining work to Indy audiences,” American Lives Theatre, shepherded effectively by its founder and Artistic Director, Chris Saunders, struck gold once again with its production of Will Arbery’s “Heroes of the Fourth Turning.” I attended Friday’s opening night performance at IndyFringe Basile Theatre. 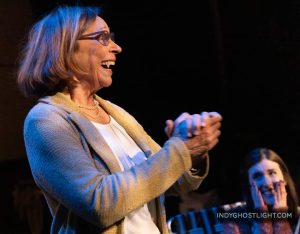 Upon entering the space, it became immediately clear that this theatrical experience would be unconventional. For one, the Basile stage had been transformed into transverse seating with the elongated playing area surrounded by audiences on two sides. Plus, in his curtain speech Saunders warned the crowd that the play had a running time of two hours with no intermission.  Despite my misgivings that the play length would prove difficult to endure without a break, I am pleased to report that my acute attention to Arbery’s potent script and the actor’s performances never waned. Time simply flew by, and the play, adroitly directly by Andrew Kramer, a freelancer with extensive national credits, was over before I knew it.

“Heroes of the Fourth Turning,” a finalist for a 2020 Pulitzer Prize in drama, premiered off-Broadway in 2019. The play’s curious title refers to the Fourth Turning, a concept in the Strauss-Howe generational theory. Set in 2017, shortly after the Unite the Right rally in Charlottesville, the play takes place in a backyard where four friends, Justin (Tyler Lyons), Emily (Devan Mathias), Kevin (Taylor Cox), and Teresa (Morgan Morton) gather to spend the evening after attending a reunion at their fictional alma mater, Transfiguration College, based on ultra-conservative Wyoming Catholic College, located in Lander, Wyoming. Throughout the evening, the friends engage in intellectual, often contentious and confrontational, discussions of political and religious topics. Eventually, they are joined by Gina (Gigi Jennewein), both their former professor and Emily’s mother, who has recently been appointed president of the college. Tension pervades the proceedings once their individual philosophies collide, revealing that, as tried and true conservatives, they are nowhere near monolithic. 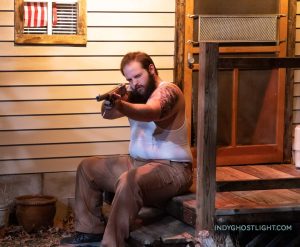 Taylor Lyons – Courtesy of Rob Slaven Use. with permission,

ALT which has acquired a reputation for the first-rate caliber of its actors, reinforced its respected brand with a “Heroes” ensemble that turned in performances that were uniformly superlative. Mathias stood out as choric pain-ridden, compassionate Emily. Her character’s gut-wrenching monologue near the end of the play was a stunner. Cos, who played Kevin, a tortured alcoholic curious about mainstream hedonism and yearning for love, gave a performance that was a triumph for its raw honesty. Lyons, who played an outdoorsman and Marine with a penchant for guns, shined in his characterization of the still-waters-runs-deep Justin whose deep faith is unquestionable. Morton was totally convincing in the role of the radical Teresa, who writes for a right-wing publication and is a steadfast acolyte of Trumper Steve Bannon. Lastly, Jennewein, who is always impressive in any role she plays, once again turned in a stellar performance as Gina, the wise, guided-by logic and-reason professor-turned-college-president, who regards herself as a “true conservative” uninfluenced by radical right doctrines. 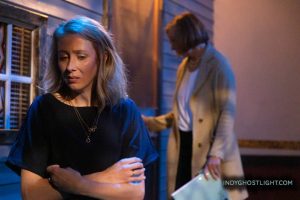 In a press release about “Heroes” Saunders is quoted as saying, “It’s not a well-kept secret that most people in the arts tend toward liberal sensibilities.” Speaking for myself, I concur. That is why there was no one more surprised than I was that I could absorb the content of this examination of modern conservatives with an open mind.

“Heroes” held special interest for me because, though non-practicing, I was baptized, raised, and educated Catholic. Coincidently, a great-nephew of mine, whose immediate family consists of the very conservatives depicted in “Heroes,” is a graduate of Wyoming Catholic College, and like his parents, and siblings is anti-abortion, opposed to same-sex marriage, is pro-guns, and supports Trump. Peaceful coexistence with him and this branch of my family demands that we steer clear of anything remotely controversial. And though our interaction has limitations, we try to focus on those things we have in common, such as our affection for one another and shared family history. “Heroes” is a good reminder that as profound as our differences may be with those we disagree with, it is still possible to do so with love, empathy, and respect, as grudging as it can be.

For tickets and info about “Heroes of the Fourth Turning,” which runs through Jan. 28, visit americanlivestheatre.org.